What is Private Cloud Hosting?

What is Private Cloud?

The Cloud has been a hot topic in IT departments, including the enterprise. Achieving the advantages of this new way of computing is not as simple as choosing the most popular brand name, however. Private cloud, public cloud, and specially designed clouds for compliance represent different models of cloud computing environments. Each type of cloud has different advantages, depending on the needs of the organization. There are also different types of cloud computing within each model. Practically any organization can benefit, but only those companies that choose the right cloud for their needs will get the most out of the technology. 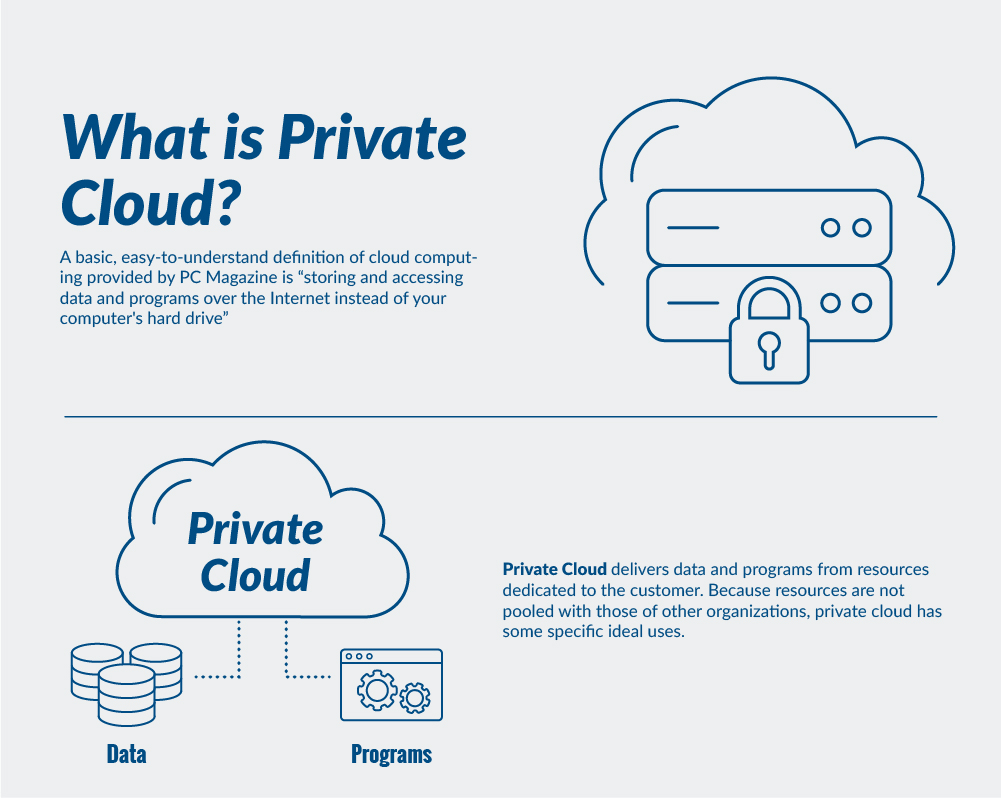 Cloud computing is enabled by virtualization, which is the creation of software-defined and controlled servers. A basic, easy-to-understand definition of cloud computing provided by PC Magazine is “storing and accessing data and programs over the Internet instead of your computer's hard drive,” while Gartner puts more emphasis on the system being scalable, elastic, and delivered as a service.

Private Cloud delivers data and programs from resources dedicated to the customer. Because resources are not pooled with those of other organizations, private cloud has some specific ideal uses.

Private clouds are typically utilized by companies with sensitive data, management, or workload demands beyond those practical for a shared environment. In the early days of private cloud, some organizations chose to host a private cloud on-premise. The benefits of private cloud are maximized when the organization leverages the data center resources of a reliable cloud provider, like Atlantic.Net. This removes the responsibility of providing and maintaining critical redundant systems like cooling, power, networking, storage, and infrastructure that normally lie far outside the core competency of most companies.

The Benefits of Private Cloud

The dedicated infrastructure of Atlantic.Net’s Private Cloud solutions allow the highest degree of visibility and control of any cloud environment, ultimately providing the peace of mind your company expects and deserves. Having dedicated resources also guarantees they will be available when they are needed, making planning easier than in a public cloud model in which a “noisy neighbour” could take up resources, potentially impacting other users in the cloud. Because new resources can be spun up and spun down as needed, Atlantic.Net’s Private Cloud retains much of the scalability and elasticity of a public cloud. It is also similarly resilient because the virtualized server workload can be redistributed to different pieces of hardware in the event of a failure.

There are several setups available for Atlantic.Net’s Private Cloud solutions, each defined by the hypervisor controlling them.

Microsoft Hyper-V is a popular hypervisor (virtual machine manager) that is strategically suited for those primarily using Windows Servers. Those who do so may already be comfortable with its interface and features, like Windows Active Directory, which Hyper-V uses for access control in certain circumstances. It also comes loaded with many features that enable easy maintenance, security, backups, and live migration.

Hyper-V can also be deployed as a “bare metal” hypervisor, meaning it does not run on an underlying operating system. Accessing hardware resources directly provides better performance, scalability, and stability.

Kernel-based Virtual Machine (KVM) is an open source hypervisor for the Linux operating system, as opposed to a bare metal hypervisor. While it is bundled with Linux, KVM supports running a wide variety of operating systems as “guests,” including Windows. One of the most-widely used cloud hypervisors in the world, KVM is touted as providing a low-cost alternative without sacrificing performance, scalability, or security.

VMware vSphere is a popular enterprise platform for deploying and managing private cloud. It is designed to run VMware's ESXi bare metal hypervisor. While vSphere is designed to work with other VMware cloud and virtualization products, it also supports Hyper-V and KVM based virtual machines. vSphere ESXi trades some of the flexibility and features of Hyper-V for a smaller footprint and more simplicity, which contribute to its strong security and ease of use.

Who is it for?

The decision to run a private cloud, and the choice of which kind of private cloud technologies to use should be made based on the needs of your organization. If your company needs custom provisioning and automation, security, and a greater degree of control and flexibility, you will achieve the greatest benefit from deploying a private cloud.

Whatever kind of Cloud is right for your organization, successfully delivering its benefits to your business and its customers requires starting with a realistic plan, following that plan, and partnering with the right service provider. Atlantic.Net has over twenty years of experience, with expert staff that are available to assist you and your company’s needs 24/7. Contact us today, and we will work with you to create a custom Private Cloud Solution that is perfect for your business.

What is Private Hosting?

Private Hosting is a hosting arrangement such that an organization’s infrastructure, databases, and servers all exist in an exclusive location inaccessible to anyone outside the company or the private hosting provider. This type of hosting is often used by large companies in need of enterprise-grade functionality.

In the early days of the Internet, private hosting was done completely on-site for big companies. They would invest in servers housed in the organizations’ headquarters or a private data center.

In the 2000s, improvements in software and hardware capabilities led to the development of the virtual private server (VPS). VPS technology allows software called a “hypervisor” to use the physical hardware of a server, such as memory, CPU and networking capabilities. Each virtual server acts like a normal operating system with its own applications, email software, Internet browsing capabilities, etc. Each user has his or her own unique user ID, password, and authentication code to sign on with. For an example of the benefits of VPS Hosting, consider a company with offices in different parts of the world. Say a chemical news bureau is headquartered in London but also has other offices in world energy hub cities such as Houston and Shanghai. Rather than redundantly set up the Texas and China offices with all of the same hardware and servers in London, a VPS hosting solution is established. A virtual server powered in the UK allows users in Houston and Shanghai to log on through a virtual server and see the exact same desktop and shared file servers as their colleagues in London. 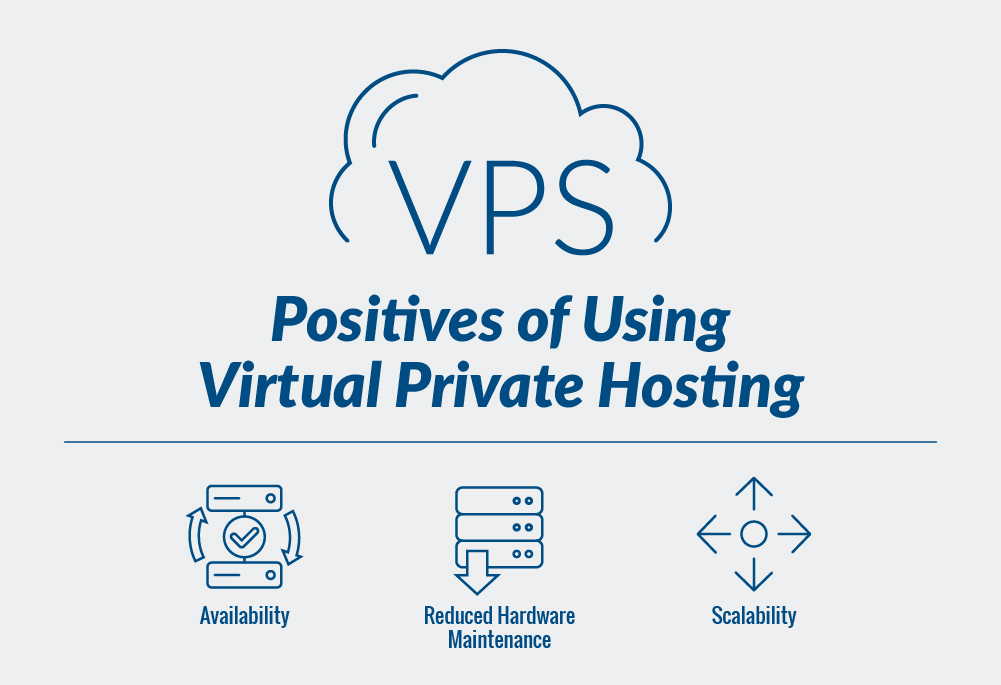 Availability: Virtual servers are spread across hundreds of computing nodes, but they only run on one node at a time. If a server on one node encounters an issue, it can be easily migrated to another node. While this alleviates downtime compared to a physical machine, it doesn't completely prevent it. This also simplifies load balancing and disaster recovery.

Reduced Hardware Maintenance: Computers that do a lot of ‘heavy lifting’ from running various apps and performing lots of high-level commands wind up needing a lot of maintenance to make sure they don’t suffer from any number of system decay issues. When using a VPS, the actual hardware is only doing one thing - logging on to the virtual server - taking up considerably less local memory and resources.

Scalability: While dedicated private hosting requires the purchase of additional hardware, adding a server or memory space can be done instantaneously with a VPS as long as there is space on the computer to configure additional virtual servers.

If you require a private environment, Atlantic.Net has the solution: Private Cloud. Our Private Cloud solutions deliver scalability, flexibility, and elasticity with the control and customization you can only get from having dedicated resources, all while delivering the cost-effectiveness of cloud computing technology!

Atlantic.Net addresses this by deploying your complete Private Cloud environment on dedicated hardware. In addition, our Private Cloud Hosting comes with dedicated redundant networking and storage. With the virtualization technology of your choice, we’ll deploy a customized, fully-optimized Private Cloud solution, no matter what your specific needs may be. Our decades of experience providing for high-demand, high-security clients means that we’re uniquely suited to help address any security or compliance concerns your organization may have.

Atlantic.Net’s Private Cloud solutions are provisioned using the latest hardware and software technology, using custom Microsoft Hyper-V configurations to increase flexibility and portability. Private Cloud Hosting offers the benefits and savings of cloud technology with the peace of mind knowing your applications are residing on a totally private infrastructure dedicated exclusively to your organization.

Why handle your own server management when you don’t have to? Let Atlantic.Net manage your Private Cloud. We have decades of experience managing cloud computing environments. With Atlantic.Net’s Managed Hosting solution, you can readily provide your organization with a powerful, easy-to-use solution that leaves everyone to focus on what’s important.

In addition to all the dedicated resources, cost-effectiveness, and increased availability that comes standard with Private Cloud, you also gain access to a wealth of knowledge: our fantastic support team. With around-the-clock monitoring and technical support, we are here to manage every aspect of your server for you whenever you need it.