Ubuntu 15.10 was released for public use on October 22nd, 2015.  Nicknamed “Wily Werewolf” it comes with a few upgrades and changes that are worth noting.  In this overview, we will briefly touch on the changes and upgrades in the newest version.  Ubuntu 15.10 is primarily noted as a stepping stone to the release of Ubuntu 16.04 LTS, the next Long-Term Service release coming in April 2016.  Most of the major features remain largely unchanged from the current 15.04 LTS.

A kernel for Raspberry Pi 2 has also been added to the archives.

One of the major changes is the migration to utilize systemd as the primary init system going forward.

Ubuntu 15.10 now holds the newest edition of OpenStack, Liberty, including:

There is also experimental support being offered for erasure coded storage.

As a personal use note, I updated my home computer to this version and did not notice any glaring changes after a few days use.  Things ran mostly how they always have, but maybe a little prettier.  I expect greater things are in store for Ubuntu 16.04.

More information on the history and recent updates to FreeBSD can be found on the direct website.

What you will need

In order to start setting up your FreeBSD server, all you need to do is create a server in cloud.atlantic.net.  A tutorial on adding a new cloud server can be found here.

The FreeBSD system configuration information is contained all in one file: /etc/rc.conf

You’ll find your network configuration in this file along with enabled daemons/system services.

For more information on how to configure FreeBSD and further options that can go in this file, view the FreeBSD Handbook.

The default package manager on FreeBSD 10.0+ is ‘pkg’.

In order to use this on a newly provisioned system, one should first run ‘pkg update’

Determine if updates are available for already installed packages:

See these links for more info:

After the /etc/rc.conf changes, you must restart the network and routing services to bring up the private network:

In some of the newer Linux distributions, “init.d” or “rsyslogd” has been replaced by a program called JournalCTL.  Previously, logs were typically found in a particular location for each separate log file, rather than being easy to locate, manage, and manipulate.  Systemd made these log files easier to access by centralizing them, logging all kernel and user processes in one “journal.”  Journalctl is the newest version of this, which makes it even easier to manage these files.

In this guide, we will explain the basics of journalctl as well as a brief overview of suggested uses for the program.

Must have a Linux distribution with journalctl as the system log management program, for example, CentOS 7.  If you do not have a server, consider a super fast SSD virtual private server from Atlantic.Net.
END_OF_DOCUMENT_TOKEN_TO_BE_REPLACED

cPanel is a leading web-based control panel that intuitively lets users manage all aspects of their website and creates valuable functionality by streamlining essential processes. From adding sub-domains and email accounts to installing scripts and checking bandwidth, the control and flexibility provided by cPanel is unsurpassed. By integrating cPanel with the impressive power of a Virtual Private Server from Atlantic.Net, the result is a truly efficient way to scale hosting solutions and manage individual servers from one user-friendly interface.

All VPS Plans Are Equipped With Cloud Features!

cPanel/WHM is available on Atlantic.Net’s VPS in the Cloud platform, which makes web hosting and managing individual servers both easy and effective. With Atlantic.Net’s world-class VPS hosting service, users can provision cPanel/WHM-ready VPS in seconds, as opposed to the 60-90 minutes required for self-installation or on-site physical or off-site dedicated servers. Call 1.800.521.5881 today or email us at [email protected] for VPS in the Cloud!

An SSL is an acronym for Secure Sockets Layer.  SSL is the standard security technology for establishing an encrypted link between a server and a browser. This link ensures that all data passed between the web server and browsers remain private and integral.  If you have sensitive information on your website then an SSL certificate provides security so others cannot see your data.  Without an SSL certificate, your website data is open for all to see.

What is File Transfer Protocol (FTP)

What is FTP and How Do I Use FTP?

FTP is a way to transfer files between hosts over the internet. It is especially helpful as a way to upload or download files to or from a site quickly. To make an FTP connection you can use a standard Web browser (Google, Internet Explorer, Mozilla Firefox, etc.) or an FTP Client.  An FTP Client is a software designed to transfer files back-and-forth between two computers over the Internet. It needs to be installed on your computer and can only be used with a live connection to the Internet.  When using an FTP client such as Filezilla it is a simple process to transfer files. Generally FTP clients are divided into two panes so the process can simply be completed by dragging and dropping from your computer to your cloud server. Atlantic.Net offers many hosting solutions from HIPAA compliant database hosting to our popular selection of one-click applications.

This guide will show you how to delete an Atlantic.Net Cloud Server from your cloud.atlantic.net portal.  Please keep in mind that once a server has been removed, any and all data stored on that server is immediately deleted and irretrievable for security reasons.  Be sure that you want to remove the server you have selected as this action can not be reversed.

How to Delete a Cloud Server

To delete your virtual private server, select the box next to the server you would like to delete. The box should turn into a blue square with a white check. If you are ready to remove the server, click remove. 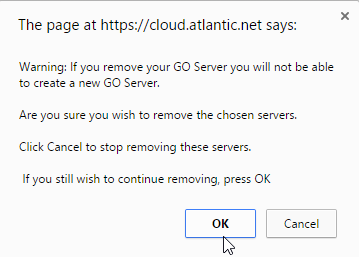 After you click remove, you will get a warning message saying that you are about to delete your server. If you are sure, click OK.

After you click OK, you should see that your server’s status has changed to removed.

If the above step by step directions do not assist you in completing your task or an issue arises while following these steps, please feel free to contact our Support Department at 800.540.4686 (option 3) or e-mail us directly at [email protected]

Note: The scope of this article does not extend to updating your DNS name, so if you want your server reachable via its DNS name, you will still need to ensure DNS is configured correctly.
END_OF_DOCUMENT_TOKEN_TO_BE_REPLACED