While many computer hardware acronyms like “CPU” and “RAM” are familiar to the average user, an increasingly important one that might not be as familiar to some is RAID.

RAID stands for a Redundant Array of Independent Disks. It’s a method used to protect data residing on hard disk drives or solid-state storage devices. Without RAID, information stored on disk drives in powerful computers, like servers and NAS devices, would be much more susceptible to data loss.

Redundant storage devices can mitigate a potential drive failure. Organizations who cannot afford the risk of mechanical disk failure and the associated loss of enterprise data are better protected if their storage and backup devices employ the proper RAID configurations.

Reducing or eliminating the risk of data loss was the driving factor in the development of the RAID methodology. Since its introduction, different forms of RAID have evolved to address the needs of protecting stored data resources.

Is RAID a Backup Method?

One misunderstanding that needs to be cleared up before we continue is that RAID storage is not a backup method, nor does it eliminate the need to perform backups to protect data assets. RAID deals with protecting live data and ensuring that it remains available for use. Here are some reasons why RAID does not offer the protection against data loss offered by a viable backup strategy.

Don’t get confused and assume that your data is protected simply by using RAID storage. RAID will keep your systems running in the face of hardware failure, but a backup strategy is essential to keep enterprise data assets safe.

Why Are There Different Types of RAID Implementations?

The different RAID levels provide enterprises with varying levels of data protection and performance. As with many aspects of the computing world, one size does not fit all. Differing goals often demand radically different solutions. This is certainly the case when discussing protecting data with RAID.

There are three general categories of RAID storage levels.

In the next section, we will take a closer look at the distinctions between the different levels of RAID.

What Are the Differences in RAID Levels?

There are substantial differences in the various RAID levels available to organizations. A RAID array is composed of multiple logical disks which are identified by their logical unit number (LUN).

RAID 0 performs simple disk striping which involves spreading the data across all the physical disks in the RAID array. It does not use parity to ensure that data is correctly written when it’s moved between drives. This lack of parity results in no redundancy or fault tolerance.

Better performance is the major advantage of RAID 0. Data striping increases the number of I/O operations that can be performed simultaneously, and there is no overhead required when writing to RAID 0 disks. RAID 0 provides the least data protection of all RAID levels due to its lack of parity.  If one drive fails in a RAID 0, then you have lost your data on that RAID array.

In RAID 1, data is written to two physical disks using a technique known as data mirroring. If one disk fails, data is still available from the second disk. At least two disk drives are required for a RAID 1 implementation.

Faster read operations are one of the advantages of RAID 1. It also offers failure protection by immediately switching over to secondary devices when primary drives fail. Since data is written twice, write speeds are slightly reduced in RAID 1. It also doubles the required amount of disk space.

RAID 1 is good for mission-critical applications as well as systems that require improved levels of performance and availability.

Both disk striping and parity are implemented in RAID 5. Data and parity information is striped across the disks of the array. RAID 5 offers a nice blend of performance and availability, making it the most used RAID level.

The advantages of RAID 5 include excellent throughput and performance. The parity implemented in RAID 5 results in slower write than read speeds. RAID 5 is good for systems that are challenged by a limited number of drives.

Two parity stripes are used to increase the level of protection afforded by a RAID 6 implementation.  RAID 6 allows data recovery during simultaneous drive failures and requires at least four drives. The dual parity protects against data loss and fewer disks are required than when mirroring is involved. RAID 6 does not perform as well as RAID 5 but is very suitable for long-term data retention and business-critical applications. 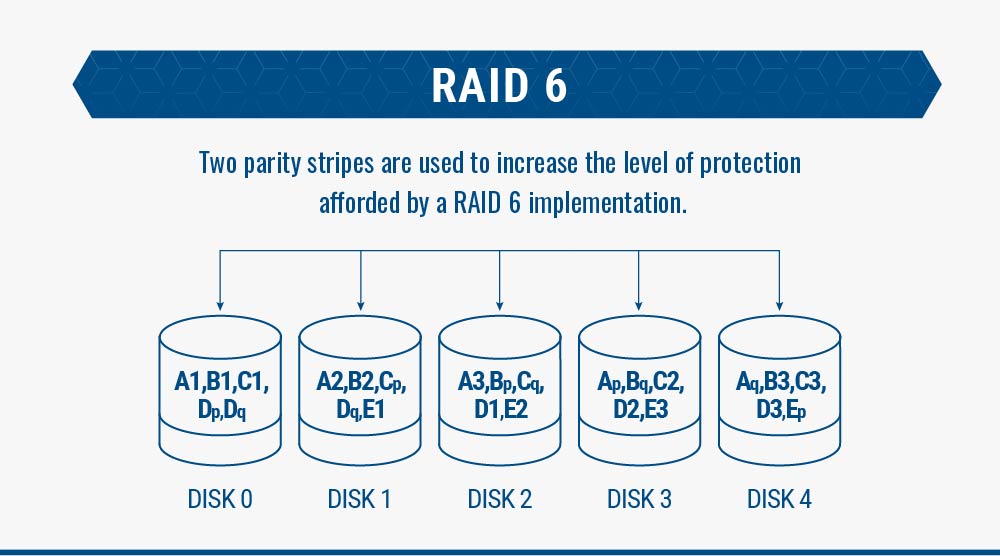 The advantages of RAID 10 are a combination of enhanced performance and data protection. It is a more expensive solution as it requires more physical disks than other RAID levels. RAID 10 is best used for I/O intensive applications and those that cannot tolerate downtime. 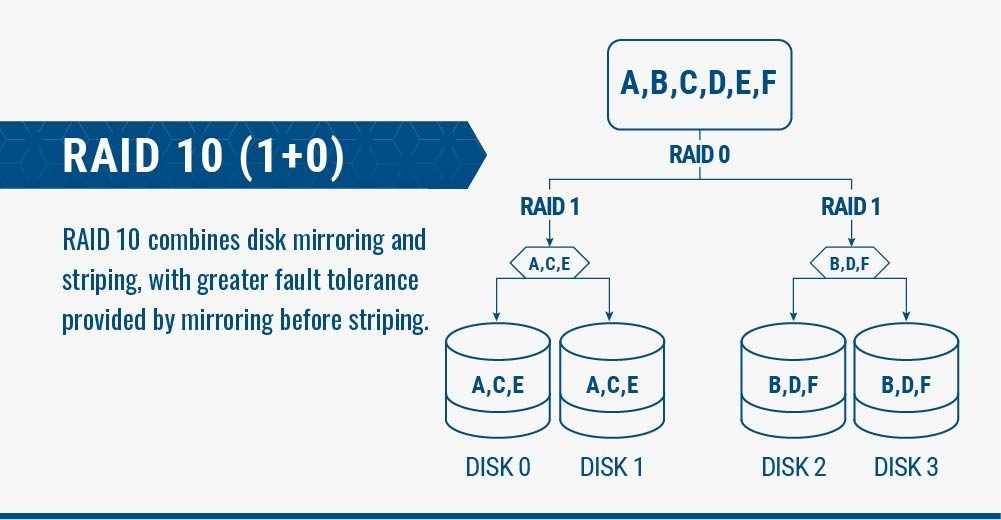 RAID 50 requires at least six disks to implement its combination of disk striping and distributed parity. The advantages of using RAID 50 are faster performance and better data protection than that of RAID 5.

RAID 50 requires a sophisticated controller and its disk requirements can make it more expensive than alternate solutions. It is best used by applications requiring high data transfer rates and reliability. 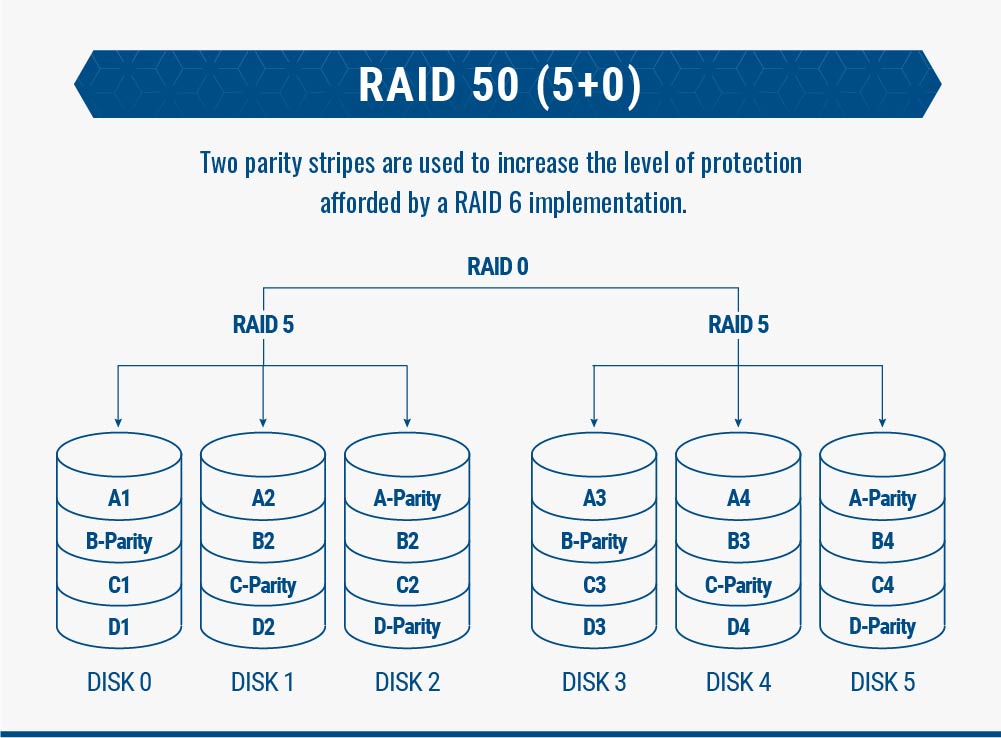 Why Should I Care About RAID in the Cloud?

Cloud computing may seem to be an abstract concept, but it relies on large physical data centers filled with servers and storage devices. At some point, the information an enterprise sends to the cloud is stored on a physical storage device. RAID provides a method with which cloud providers can furnish exceptional access to customer data.

You want to know that your cloud provider takes advantage of the benefits of RAID storage or some other form of redundant storage in their solution.  There are some cloud providers that do not replicate your data by default and if the drive you are on fails, your data will be lost.