This was my personal experience with Tesla Motors. I’m a fan of what Tesla Motors is trying to accomplish and hope they get their issues worked out.

With a new baby on the way, I was in the market for a new vehicle.  I scheduled a test-drive with Tesla Motors (Tesla) in mid-November and was on the fence about purchasing a Tesla. I had some questions which I emailed my test-drive consultant, but didn’t receive any response and I wasn’t particularly in love with the car, so I let it go.

A few weeks later, I was talking to a friend of mine who had just leased a Tesla. I explained my experience, and how I felt the price of the car was too high for what it is. While Tesla doesn’t offer discount cars, he explained there is a way to pay less. Tesla has what are referred to as “inventory cars”. These are cars used for test drives, showrooms, as well as loaners. They do have mileage, you have to take them “as is”, and there is no custom configuration. But, if you can find one to your liking you can get a pretty big discount.  He recommended I speak with his Owner Advisor, Kevin, and he connected me with him.

Tesla doesn’t have a traditional dealership network; it is pioneering the luxury electric vehicle (EV) segment and pioneering selling cars without traditional dealerships. That means it operates its service centers and showrooms itself. By unifying this process it should give a better experience to it customers. Kevin, the Owner Advisor (salesperson) I was referred to, is based out of Tesla HQ in Palo Alto, California.

After working with Kevin for a few weeks, I was able to find a car that met my needs in Pasadena, California. On December 24, I placed my order with Kevin by paying $4,000 as a deposit. Kevin assured me that this secured the vehicle for me and that it was marked as sold and unavailable for anyone else to sell. I followed up with him the next week, and he said they were just trying to find a carrier to ship the car to Florida, and I should begin working with my Delivery Specialists. 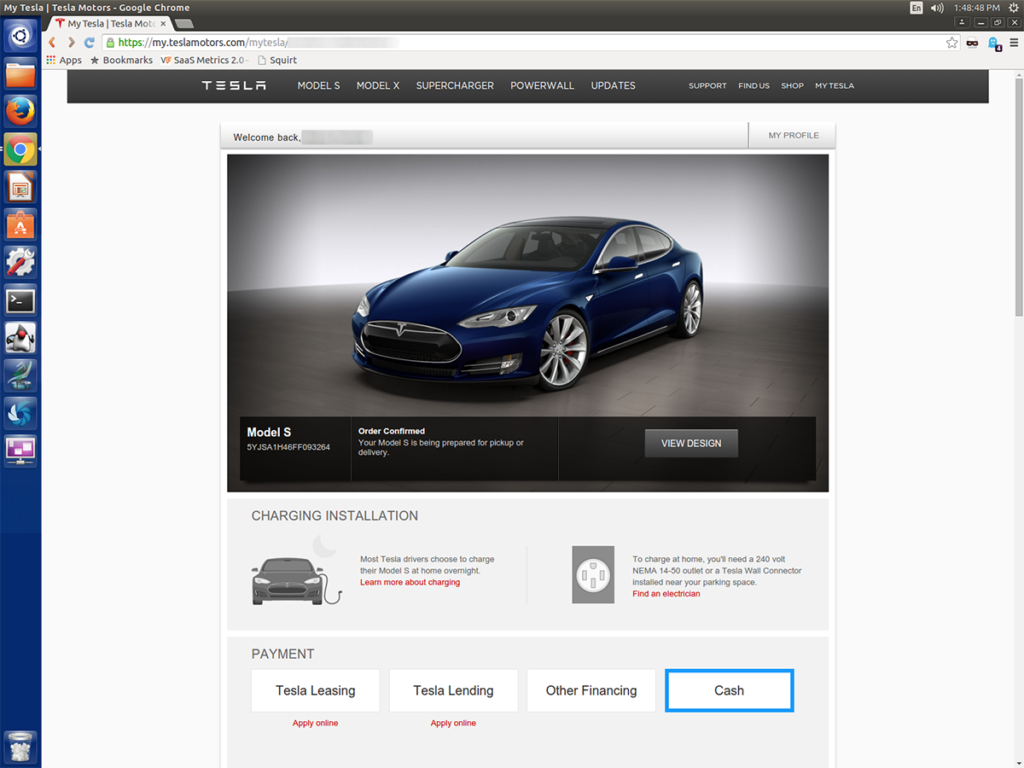 (Above, the confirmation screen with VIN of the Tesla Model S Elon Musk is driving)

Tesla has Delivery Orientation Specialists and Delivery Experience Specialists who work to help you through the process of getting the car. In my case, it was Caroline and Chelsea. Caroline explained to me that typically it takes a week to get the car, but because it was late in the year it might take up to two weeks, with the latest delivery date being Jan 8. She also explained that there was no way to get the car by the end of 2015. This made sense, because as a public company, Tesla was striving to meet its delivery commitments to its shareholders. By prioritizing deliveries of cars that could actually be delivered before the end of 2015, they could meet their quotas, and then deliver cars (like mine) early in 2016. Because I wanted to support Tesla, I didn’t think much of anything when I didn’t hear from anyone from that point on.

The week of what I thought would be my expected delivery, my electrician was calling to schedule the installation of my additional power receptacle in my garage. We had agreed to do it once I got the car. I began calling my local Tesla location and choosing the “New Vehicle Delivery” option, but it would only ring and go to a voicemail that hadn’t been set up. I called repeatedly and no one would answer. Frustrated, I called and chose the “sales” option and spoke with a representative there that took my message and assured me someone would call me back.  Still, I got no calls back. Since the car was coming by January 8, I was starting to get concerned. I had to coordinate the car, the power installation, disposing of my old car in a sequence of events that I couldn’t start until I knew when I would get the car.

By Wednesday, I was emailing my delivery specialist and calling. I didn’t know what was going on. By Thursday, I was showing people at work how they don’t answer the phone or respond to my email. I was very concerned that I was paying over $100k for a car, and if this was the new sales process how terrible would the service be? Should I just cancel? How could I cancel if no one would even talk or communicate with me? Was there a problem in transit? Basically, I was stuck and frustrated, plus I had already paid for a deposit which covered the non-refundable transportation cost.

Exasperated, I called the local Tesla dealer again. This time, no one answered and my call was transferred to Tesla HQ. The representative asked for the 6-six digits of my vehicle VIN. Tesla offers a “my Tesla” portion of their site that new buyers login to, to sign electronic paperwork, upload copies of driver’s licenses as well as proof of insurance. In addition, it shows a model of the car and some advice on how to power it. Most importantly, after you make your initial payment, the reservation number for your car is replaced with a VIN (Vehicle Identification Number) which signifies the specific car which is allocated to you. This is done shortly after you send in your initial payment. Therefore, I was able to provide my VIN information to the Tesla representative, who promised me Kevin my original Owner Advisor would call me back.

On the evening of January 7, the day before I was to receive my car, Kevin called me to explain he had a call in with the Office of the CEO at Tesla and was working with his team in Tesla to resolve a problem that had come up — their CEO, Elon Musk, had taken my car and was using it as his personal vehicle to test a new version of autopilot. Even worse, he said he could see all the calls I had made into the Orlando delivery center this past week, and no one was taking my calls because no one knew what to do.

Tesla logs every inbound call to their centers, and stores all of this in a national database. This is most likely tied into a CRM (Customer Relationship Management) system, to provide better service. So, for example, Kevin in California saw detailed records of all my attempts to connect with someone in Orlando.  Since no one knew what to do, they were deliberately avoiding taking my calls or communicating with me.

I was floored. Not only because my car had been taken by their CEO, not only that no one bothered to reach out or communicate with me, but they were actively trying to avoid me.  I called and reached Kevin again on the evening of Jan 8. He explained my original car was so aftermarket at this point there was no way I would get it. Kevin began suggesting a different car that didn’t match what I was looking for, then suggested another car for $20k more.

Frustrated, I called Tesla HQ to complain and requested to speak to someone in the Office of CEO. The person answering wanted to know why so I explained the situation and was transferred to a Ms. Kloskey (sp?). As was typical with Tesla, not only did she not answer, her voicemail was full so I couldn’t leave a message. I hung up and called back, and reached a representative who I explained my situation to, and requested escalation to someone who could make things right. The representative took my message and said he would forward it to the appropriate person.

I received a call back from Kevin, who explained he had gotten the memo that I called. Once again, I couldn’t penetrate Tesla’s screening system to find someone who cared, empathized, or treated me like a human. I could only speak with Kevin who was unhappy that they didn’t give me the right experience.

Tesla has a strange way of communicating with customers I think is best described as customer service vaporware. That is, they spend more time trying to create the illusion of customer service, rather than actually providing it. There is no mechanism for them to get feedback, as I tried to provide, so it is difficult to see how they can improve if they don’t know where they are going wrong.

Tesla is pioneering two things at once, (a) a luxury full-EV segment for passenger vehicles, and (b) bypassing the traditional dealer network and selling directly to consumers. Since I never got my car, I can’t speak to (a). But, because (b) is so horribly broken, I don’t think (a) can succeed. My concern is if Tesla fails the experiment of directly selling cars to consumers may be considered a failure when in reality it was tremendous missteps on Teslas part that caused it to not work. Right now, Tesla ships low volumes of cars to early adopters and ardent enthusiasts who will overlook the organizations short-comings. But I think launching a higher volume (Model 3) sedan later this year with their current organization will be watching a slow-motion train wreck.

In the end, I canceled my order and Tesla agreed to refund my money. If a tech-savvy $100k car buyer can have this experience, what hope is there for this organization to go mainstream? Tesla is a publicly traded company that loses money. So, strictly speaking, it doesn’t need customers as long as it can fund its losses via Wall Street. In my experience, it’s a hobby masquerading as a company, and it can probably run as a hobbyist organization for some time. But, at some point, customers will matter, they always do. Hopefully, if this post reaches the right people in Tesla it will serve as a wake-up call to right their ways before it’s too late.

In 21 years as a founder/CEO of my own VPS Hosting and HIPAA Hosting company, dealing with Tesla has been the most bizarre and strange experience I’ve had interacting with another organization.

Note: There were many other errors, selling me a Ludicrous upgrade which didn’t apply to my car, Tesla endorsed electricians not familiar with Tesla, dual charger availability issues, etc. My experience regarding these issues may have been affected by their employees trying to avoid me.