Networks are composed of two or more devices that form one group, and each device is assigned a unique IP, that identifies them to that specific group. In order to keep things organized and protected withing a network, Network Administration is very important. In this how-to we will walk through the Network Administration on a FreeBSD server.

A FreeBSD server configured with a static IP address. If you do not have a server already,  spin up an Atlantic.Net reliable SSD Virtual Private Server.

Set up your IP address in FreeBSD

First of all,  let us look at your current active interface configurations so we can Identify some important settings that make it all work. To see your network configurations type the following command: 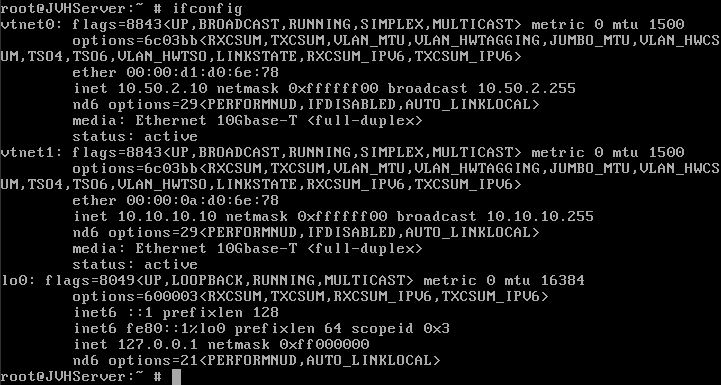 This is the output after running the ifconfig command in FreeBSD

Do not be alarmed of all the information that you see on the screen. We will need to identify the following two pieces of important information so we can properly verify and configure a network interface.

Interface: Usually identified as ethX, our virtualized instance names the interfaces in the above output as vtnet0 and vtnet1. These interfaces are the point of connection between the device and the private or public network that they are connected to.inet: This is the IP addressed configured for use on the interface. Above, you can see that IP 10.50.2.10 is configured on interface vtnet0.

Static IP’s are IP addresses that are assigned to specific devices and will remain assigned until the IP it is removed or changed. Adding a static IP address could be accomplished using two different methods.  You could set the IP so that it holds that address temporary, which will then be removed once the device or networking is restarted, or you can assign it permanently.

To configure a temporary static IP address, you could run the following via command line:

If you would rather permanently assign the IP address, you’ll need to make some changes to the network configuration files.  Unlike the temporary one, you could reboot the device, and once it’s turned back on, it will hold the IP address that you specifically assigned to it.

Locate the line that reads “ifconfig_ “and replace IP address that is there with the one that you want the system to have permanently.
Note: This can be done two different ways, depending entirely on your preference for subnet notation:
or

You will also need to configure the default Gateway for your network interface. The default gateway is the next hop on your network and is typically a router or switch that handles network connectivity and routing. The gateway is usually the first IP address in an IP range which gives you access in and out of the network that it belongs to. Setting the default gateway (called defaultrouter in FreeBSD) is again done by editing the rc.conf file.

Locate the “defaultrouter=” line and adding the Gateway IP address.

Alternatively, you could also add a default gateway address with the following command, though this will only be a temporary addition:

If you would like to remove the default gateway address, this can be accomplished via with the following command:

Dynamic IP’s are random IP addresses that could be assign or leased to specific devices. They are held by the device for a period then released and then the device would grab another IP. Adding a Dynamic IP address could be accomplished using two different methods.  You could set that device  IP so that it holds that address temporary, which will then be removed once the device is restarted, or you can assign it permanently.

To configure a temporary dynamic IP address, you could accomplish this using any one of with the following  command:

To set up you system so that it always receives a dynamic IP Addresses, we must configure the system manually. As before, first open the rc.conf file using a text editor with the following command:

Now, Locate the line that reads “ifconfig_ “and replace IP address that is there with the DHCP setting that it will permanently have. This should look like the following:

DNS servers are specific servers with large libraries of registered domains which directs your request when you search a domain in your web browser. These are public servers that can be used by anyone. Google has them available along with many other companies. However, we will be using Atlantic.Net’s name servers so that domain lookup can occur quickly. This can be completed by editing the “resolv.conf” file using your text editor with the following command:

Add your name servers to the “resolv.conf” file using the following lines (each line representing one name server, these are used for Atlantic.Net Cloud Servers.).

Congratulations! This completes our session on FreeBSD Network Administration. Thank you for following along! Check back with us for further updates and try one of our top VPS hosting solutions.
Get A Free To Use Cloud VPS