Git is a version-control system. It allows many files to be maintained, changed, backed up, and shared while automatically keeping records of all previous versions. These file types include, but are not limited to: code files, documents, contracts, HTML and CSS files, and more. Anything that is text-based is usable with Git.

Have you ever updated a program, a website, or a document only to wish that you had the previous version on hand? Maybe your changes broke the program or website, maybe you cut-and-pasted over some vial information. Either way, a timeline of changes would save you time and effort, which is exactly what the Git protocol was built for.

Additionally, Git can be set up to create automatic backups of any file when saving (“committing”) a file or change to the system. It’s a rapid and lightweight system, as well: the Git protocol only saves the changes you’ve made to each file, not each file individually.

Finally, Git is the industry standard when working with code. It allows multiple users to access and edit the same files without conflict, to bring a local copy (“clone”) of a project to a user’s computer, create a new copy for testing purposes that doesn’t affect the original (“branch”), or to create an entirely new version (“fork”) of your–or someone else’s–program for editing with a single click or command. You can even bring the changes in a branch back into the original (“merge”).

Okay, to get started with Git, you’ll need to install some software. There are many clients out there, but we’re going to focus on one for each major operating system. 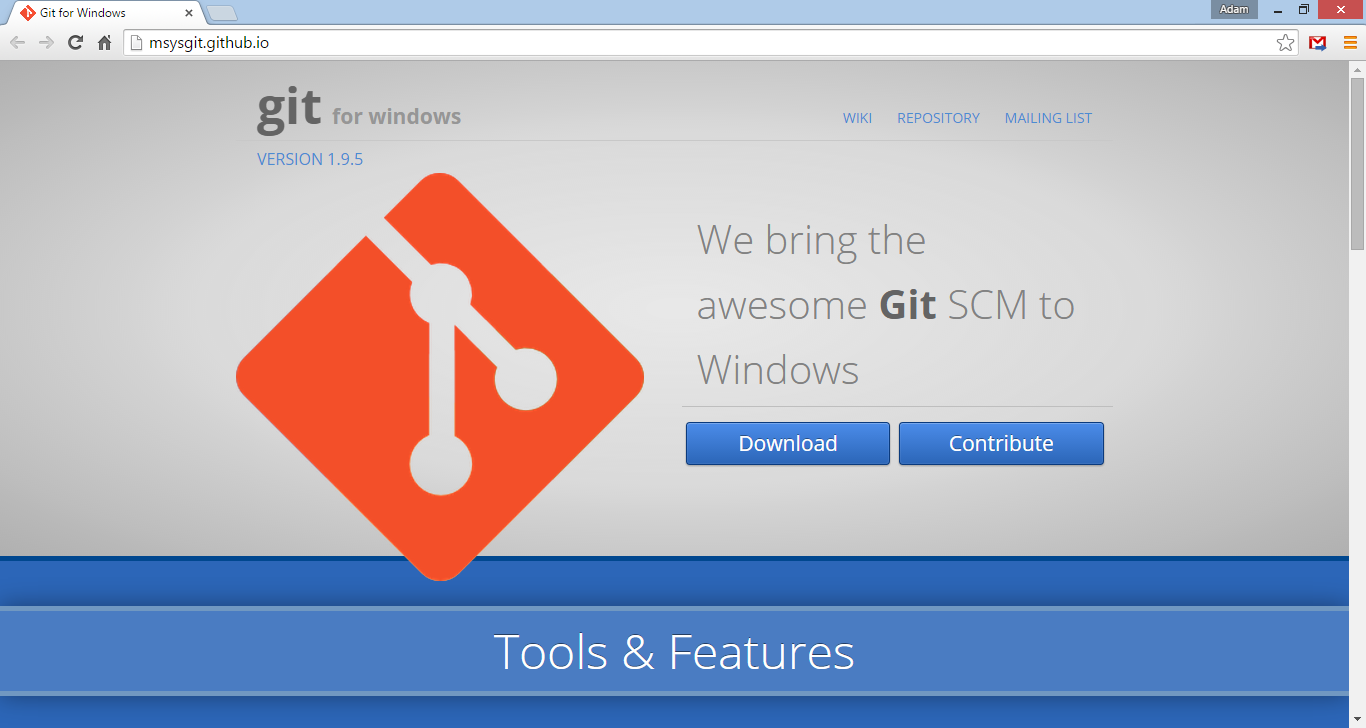 SourceForge hosts the Max OSX installer. Click the version that matches your version of OSX to download, and then install the program.

For other Linux or Unix distributions, check the package installation options here.

Before we get into the commands, we should review some of the major features and terminology used with Git.

Repository: The main database where all of your files are stored for a given project.
Index (Staging Area): The temporary holding space for the file changes you will be committing to the Repository.
HEAD: Points to a current branch where your changes will be committed.

Note: HEAD is a command and a pointer within the git system. It is used to demarcate the ‘head’, a marker which indicates to the system the current branch you’d like to edit.

Blob: the name for a file in Git.
Tag: A note identifying the version number of a document or piece of code.
Message: A description of changes made with a commit (file updates or tags)
History: A record of all commits made to the branch or repository.

Open the Git bash program you installed above: 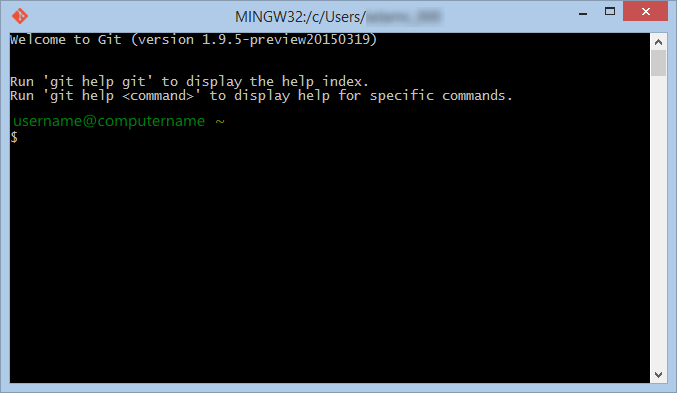 If you would like to use something other than the default folder to store your repository, create the new folder, and then navigate your Git client to the correct folder.

Example of navigating to a folder:

Where username is your user name on the computer, and foldername is the name of the folder you created.

One way to get started is to create a new repository.

To create a new repository, enter the command:

To clone a different online repository (to which you have access), enter the command:

Once you’ve made changes and would like to add those changes to your repository, there is a short process you will follow:

You need to place the files you’ll be committing each round in the Index (or Staging Area) prior to updating. Your Git client will only update those files that have been placed there. To place a file in the Index, enter the command:

Note: You can use a period (.) in place of filename to add all of the current files in the directory.

To commit the added files to your local repository enter the command:

Where message is a description of your commit changes. Make sure to include quotation marks.

While we’re here, let’s touch on commits and messages. We saw an example above, adding all files to a commit. However, the best practice when using Git is to commit only a set of related changes each time. Commits should be small, discrete chunks that can be explained with a short message. This is what makes version control (the reason for Git’s existence) useful. Small changes can be undone if they cause problems or are later found to be unnecessary or in conflict with other changes. Committing large blocks of unrelated changes makes it difficult to identify what is causing a problem or bug, should one occur. A good rule of thumb: if it takes more than a sentence or two to describe your commit, you need to commit smaller pieces.

Pushing to a remote repository allows other users to access and modify the changes you’ve made.

A branch is a separate line of thought for your content or program. For instance, if you’d like to consider a new color palette for a website, you could create one or more branches of the website and test your various color palette concepts without affecting the Master. If you settled on a new orange theme, you could then merge the “orange” branch back into the Master and replace the old palette. Let’s see how this works.

To create a new branch that will house your orange color palette, enter:

checkout is a Git command that switches between branches. The -b option creates a new branch with the name following it–in this case, “orange”.

Note: Make sure you’ve saved any work you’ve done in your editor before creating a new branch to avoid losing it.

If you’d like to switch back to working on the Master branch, enter:

Note: Git requires that you commit all changes before allowing you to switch branches.

In this example, we’ll be working with that new color palette, so we’ll stay with the new branch.

You’ll commit the branch with the same command as the Master branch.

The -a flag automatically adds all tracked files-–that is, all files that were included in the last commit that have been modified.

If you’d like to push your orange branch to the remote repository, use:

If you’re satisfied with your testing and would like to include the changes in your primary version (your Master branch), you’ll want to merge.

First, checkout to your Master branch.

Then, use the merge command to update the Master with your “orange” branch information.

After the merge, the branch still exists but is no longer needed. Delete the “orange” branch using the -d option:

If you have two or more branches that have edits to the same file, you may have a conflict when merging them successively. An example of a conflict between a “test layout” branch of your website and your “orange” branch you recently merged into the Master might look like this:

You will be responsible for changing the two files to match in the conflict areas, then running the command to finalize the merge:

You can always compare branches prior to a merge by utilizing the diff command.

We have gone over how to push changes to a remote repository, but what if you’re working with others and you need to access the changes they’ve made? That’s where the pull command comes in.

Pulling retrieves any changes made to the remote repository since you last cloned or pulled it and copies the changes to your local repository.

If you want remote updates without automatically changing your local copy to reflect the changes, use fetch:

You then have a chance to review changes and merge the updates into your Master.

When using and learning Git, you will come across the term “fork” or “forking”. Forking is merely cloning someone else’s repository into your own space, where you can modify it and create your own version without disrupting theirs, thus creating an independent version or “fork”.

You will also come across the name GitHub. With GitHub, forking is made easy and can be done with the click of a button:

Primarily billed as a collaborative tool, GitHub is a service with which you can back up and share your repositories, or contribute and fork other people’s projects. There are other services similar to GitHub, but GitHub remains one of the most popular options.

To download the client or learn more, go to Github.

There are many sources from which to learn advanced options in Git. One of the most thorough sources is the Pro Git book, available online.

GitHub also offers a playlist of video lessons, as well.