When two technologies have a similar function and a similar name, like NAS (network attached storage) and SAN (storage area network), they can easily be confused. Both of these common storage solutions connect with a network and store files and databases for machines in the network. Cloud server versions of the two perform the same function virtually rather than physically.

Although the similarities between this pair of concepts are obvious, there are significant factors separating them as well. To keep things simple below, we will discuss each storage framework in its basic (non-cloud) form.

A NAS is, theoretically, incredibly simple. It is made up of a hard drive or number of hard drives, an OS (operating system, typically Linux or Windows), and Ethernet connecting the hard drives to a network. A NAS has various benefits. Using network attached storage, a user or network administrator can share devices (such as printers), files and other data, and gigabytes of backup storage room.

File sharing – Let’s say you have NAS set up for your home computers, Computer A and Computer B. If you save a file to Computer A and have the NAS configured to save the file as well, you can access a folder within the NAS on Computer B and immediately have access to the most recent version of the file.

Infrastructurally in this situation, the NAS is connected directly to the router so that each of your devices can access it. Like an external hard drive or thumb drive, adding and removing items from the NAS can be conducted manually as well by grabbing files and dragging them into and out of the network attached storage folder.

Backup storing – No one wants to lose their files, and most of us have experienced a devastating computer crash. Backup on a consistent and regular basis is critical. Nonetheless, Greg Falgiano, a senior product marketing manager at the hard drive and storage company Seagate, notes that backing up our devices is “like flossing”: it’s something we know is essential but is easy to overlook. NAS makes the backup process consistent and predictable when it is configured to occur automatically.

A storage area network, as noted above, is virtually identical to network attached storage functionally. The Storage Networking Industry Association (SNIA) defines a SAN as a network that facilitates transmission of data between machines used for storage and other devices. SNIA notes the finer points of how a SAN should be understood:

Differences between a SAN & NAS system

Here are a few direct distinctions between SAN and NAS technology, courtesy of Everything VM:

As you can see, SAN and NAS technology is generally similar, but the systems are far from identical. It’s not always a matter of choosing which one is best. Many organizations use hybrids of the two or combinations of each for storage. Talk to Atlantic.Net’s specialists today if you have any questions about how to set up storage for your IT infrastructure. We offer a managed cloud hosting storage service that is state of the art. 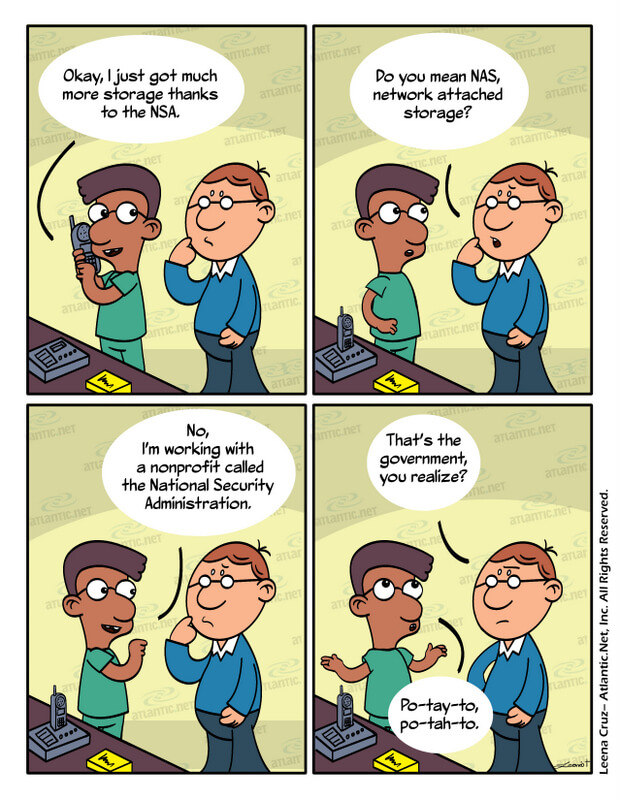 Atlantic.net offers managed server hosting services which include a layer of business-essential managed services to your hosting packages. Contact us today for more information.