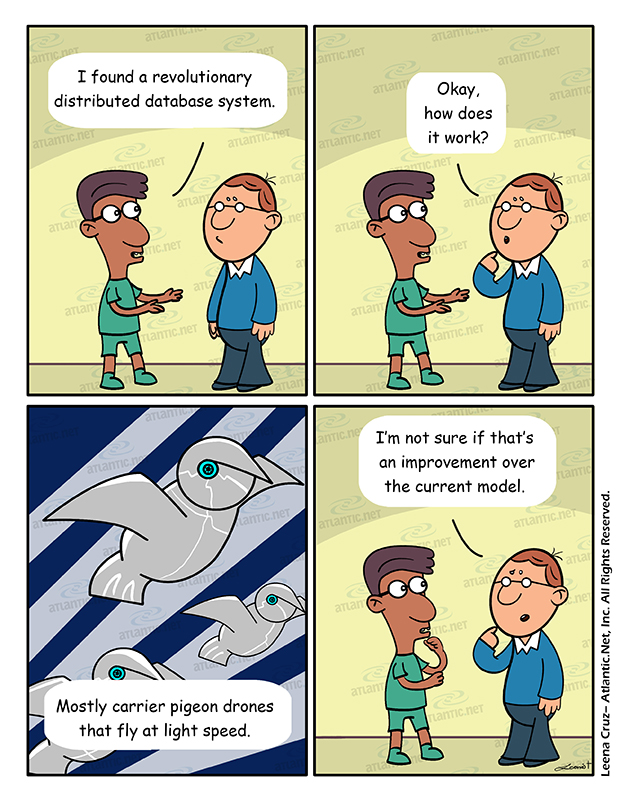 Here are the basic reasons why the centralized model is being left behind by many organizations in favor of database distribution:

Often distributed databases are used by organizations that have numerous offices or storefronts in different geographical locations. Typically an individual branch is interacting primarily with the data that pertain to its own operations, with a much less frequent need for general company data.
There is an inconsistent need for any central information from the branches in that case. However, the home office of the company still must have a steady influx of information from every location.
To solve that issue, a distributed database usually operates by allowing each location of the company to interact directly with its own database during work hours. During non-peak times, each day, the whole database receives a batch of data from each branch.

Distributed data can be divided into five basic types, as outlined below:

Replicated data – Replication of data is used to create additional instances of data in different parts of the database. Using this tactic, a distributed database can avoid excessive traffic because the identical data can be accessed locally.

This form of data is subdivided into two different types: read-only and writable data. Read-only versions also allow revisions to the first instance, and then the replications are adjusted accordingly. Writable versions can be adjusted, which then immediately changes the first instance, with various configurations for how and when all replications throughout the system experience the update.

In this type of distributed data system, updates can be configured based on how crucial it is that the database have the correct specifics moment by moment (or over whatever time period). Note that replication is especially valuable when you do not need any revisions to appear throughout the distributed data system in real time.

This type of data makes it easy to supply data from any section to any other section of the larger database if the latter section’s data is compromised by any type of error. Be aware, though, that with replication, collisions can occur. Safeguards must be in place to prevent/resolve them.

Horizontally fragmented data – This category of data distribution involves the use of primary keys (each of which refers to one record in the database). Horizontal fragmentation is commonly used for situations in which specific locations of a business usually only need access to the database pertaining to their specific branch.

Vertically fragmented data – With vertical fragmentation, primary keys are again utilized. However, in this case, copies of the primary key are available within each section of the database (accessible to each branch). This type of format works well for situations in which a branch of a business and the central location each interact with the same accounts but perhaps in different manners (such as changes to client contact information vs. changes to financial figures).

Reorganized data – Reorganization means that data has been adjusted in one way or another, as is typical for decision-support databases. In some cases,  there are two distinct systems handling transactions and decision-support. While decision-support systems can be trickier to maintain technically, on-line transaction processing (OLTP) often requires reconfiguration to allow for large amounts of requests.

Separate-schema data – This category of data partitions the database and software used to access it to fit different departments and situations – user data vs. product data, for example. Usually, there is overlap between the various databases within this type of distribution.

For more information on the types of distributed databases and security, check out our blog post on this here. Atlantic.Net is committed to keeping up with the best new advancements in technology through our Resources page that contains How-to Guides, Articles and FAQ’s.

As you can see, distributed databases represent a huge technological advancement. It’s not surprising that companies are shifting away from centralized databases and embracing the distributed model.  Atlantic.net has many hosting options for a variety of companies, including Windows Private Cloud Hosting, managed cloud server hosting, HIPAA compliant hosting and our award winning super fast SSD VPS Hosting servers.