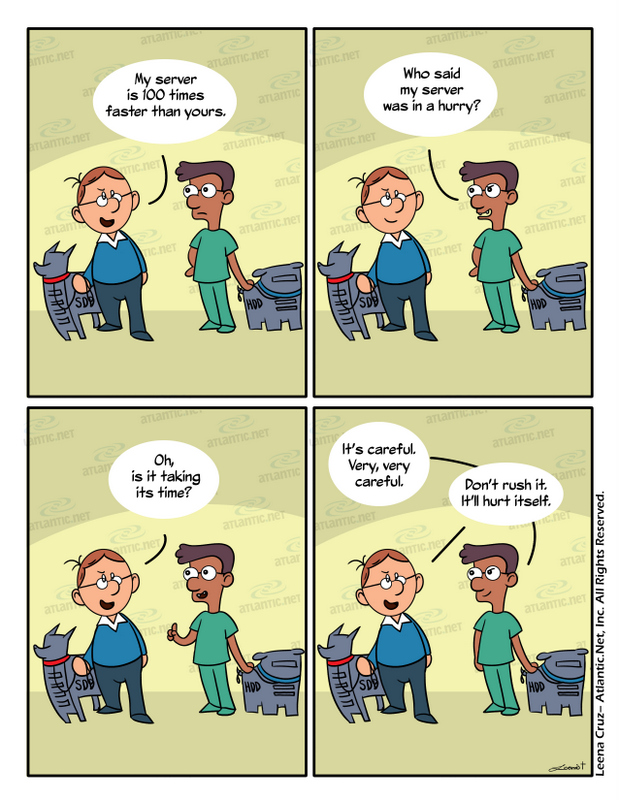 We recently drafted a piece for Wired on Cloud Hosting trends (submitted but not yet published at this writing). One of the trends we discussed in the article is the transition from hard disk drives (HDD’s) to solid state drives (SSD’s) by cloud service providers. Although this development is still in the “early adopter” phase, we expect SSD’s to become a standard expectation by the end of 2014.

This article looks at studies and other resources that compare the SSD format to SATA (Serial Advanced Technology Attachment, the format of a traditional hard drive). By looking at various data, we can garner a better sense of why the solid state is the wave of the future for cloud environments. We’ve covered some of this terrain in the past in this blog, but this article represents a deeper dive into three main parameters: efficiency, upfront price, and total cost of ownership.

Technology blogger Adrian Otto conducted analysis last year to determine whether solid state drives truly consume less power than their predecessors, HDD’s. Initially Otto was planning to test hundreds of hard drives himself. Instead, his research in the topic revealed that Tom’s Hardware has data on both types of drives, representing the expected electrical use for different processing categories. The benchmarks listed for SSD and SATA include more than four dozen drives of each type.

To better understand the efficiency of the two types of drives, Otto first averaged the energy consumption for SSD and SATA based on the type of work being performed by the server.

He divided his analysis into the following workloads/statuses:

The below chart demonstrates his findings. All figures are in Watts.

It only takes a quick glance at that chart to see that SSD represents a significant improvement in efficiency/sustainability. We can see that’s true in a variety of scenarios.

What Otto was really interested in, though, was a single statistic representing power consumption with SSD format versus SATA format. With the data available, he didn’t have any way to develop a “typical use” scenario other than approximating that scenario roughly. He crunched the numbers into general everyday data by assuming 50% mixed use (represented by the database figure above) and 50% idle.

The resulting energy use between the two types of drives is detailed in this second chart (again, the numbers are in Watts):

Again, as would be expected, SSD is dramatically more efficient. The truly interesting figure is the extent to which solid state drives consume less energy as a multiple. That’s a simple calculation between those two numbers. According to this 2013 report incorporating research and analysis from two independent sources, SSD is 5.4 times more efficient.

In 2012, Lucas Mearian of Computerworld wrote a follow-up to a 2009 article in which he compared the two different types of drives. Although we are now two years beyond that sequel piece, it’s interesting in terms of revealing the continual improvements made to the technology. He called price “the single biggest change.”

A study – published March 2014 on Wikibon.org – looked at broad, long-range factors of the drives. The research was conducted by Gary MacFadden of Parity Research, with methodology devised in conjunction with the Robert Frances Group. MacFadden’s goal was to determine the total cost of ownership (TCO) of HDD’s versus SSD’s, a subject of great interest to data centers but that also revealed alternative findings to that provided by Otto’s study.

Here are several of the salient points highlighted in the report, comparing the cost of an average enterprise SSD array to that of an HDD array:

As demonstrated by the above information, there are numerous reasons to transition from hard disk drives to solid state drives. One other primary feature of SSD’s that is not explored above is durability, due to their lack of moving parts.

As we discussed in our piece for Wired, we believe SSD adoption will expand rapidly in the near future as SATA gradually turns into a relic in most IT environments. At Atlantic.Net, the future is now. Get your industry-leading SSD Cloud Hosting today.