It’s not easy to shop for hosting because the quality is not always evident upfront. It’s not as obvious as the below scenario.

Beyond quality, it’s also unclear how much power and scope a site will require in memory, storage capacity, CPU, and bandwidth. Of course, it’s possible – and particularly speedy in scalability-friendly VPS hosting situations – to change parameters after the fact. Still, it’s easier to set up your infrastructure with enough room to serve visitors sufficiently and grow.

When looking at bandwidth specifically, web hosts sometimes have packages that offer a terabyte of bandwidth. A terabyte sure sounds like a lot, but calculating how closely a terabyte comes to meeting your needs will give you a sense of whether to select that option initially.

Bandwidth – what is it?

Bandwidth refers to the amount of data you can transfer to and from your server; most is conducted by external traffic to the site. It also involves activity on the site by employees, affiliates, etc…

Bandwidth is typically measured in megabytes per second (Mbps); standard bandwidth allotments vary but average about 50 Mbps. However, bandwidth can also be understood in terms of general data transfer throughout the month. That’s how the 1 TB figure applies. (Keep in mind, strictly speaking, a terabyte describes monthly data transfer, not bandwidth. Understanding bandwidth as a monthly rather than a “per second” figure is a nod to the term’s common usage.)

Bandwidth defines the amount of data capable of passing through the connection. The connection itself could be weak or strong. Bandwidth tells you its capacity: quantity rather than quality.

Throughput is a related concept to recognize the capabilities of the signal. Throughput is how much data actually makes its way to its destination. If the signal cuts in and out (like a cell phone signal that keeps breaking up), your throughput may be poor, damaging service quality even if you have high bandwidth.

Terabyte – what is it?

A terabyte is typically used in reference to the storage capability of a server or other computer’s hard drive. It can also be used regarding data transfer, commonly known as the monthly allowable bandwidth.

When measuring storage or processing over a period of time, such as data transfer or bandwidth, a terabyte is often understood to be the same as 1000 gigabytes (GB). A terabyte actually contains 1024GB. Similarly, 1024 or 1000 megabytes (MB) make up 1GB. Note that rounding to 1000 is an accepted convention, much like referring to monthly data transfer as bandwidth.

What amount of data can transfer in 1 terabyte?

Different types of files – such as video and digital images – range greatly in size even within their own categories, depending on the quality of an image, its file type, and dimensions. However, to get a broad sense of how much can feed through a 1TB connection throughout a month here’s a basic idea:

I mention visual files because they are relatively large. A site that is largely text will not have near the bandwidth requirements that a graphically focused site does.

Also, note that the extent to which people submit comments will affect your bandwidth as well. Although it is on “their end” on the client-side, they are still updating your database on your server. However, that is usually only an issue on sites with a heavy interactive focus, such as forums. The same would apply, to a greater degree, if you have a site to which users can post their own files. YouTube, for example, must have an extreme amount of bandwidth to allow both downloading and uploading of relatively large files.

Cloud server hosting allows multiple companies to share a server, but with much more distinction between the various sections of the server than is possible through shared hosting. In a cloud server environment, virtualization technology allows each part of the server to function as an individual unit. In a sense, then, you have “your own server” without actually having your own physical device.

Of course, you only have access to a portion of the resources on the server. However, virtualization allows for similar scenarios to account for the need to go beyond limitations, such as “bursting” and “swap space.” Keep in mind that bursting and swap space have their limitations as well.

With cloud hosting, you can easily increase your resources at any point with the click of a button in your administrative panel. As seen in the above comic, cloud server hosting can vary greatly in quality. Choose an industry leader for your site. 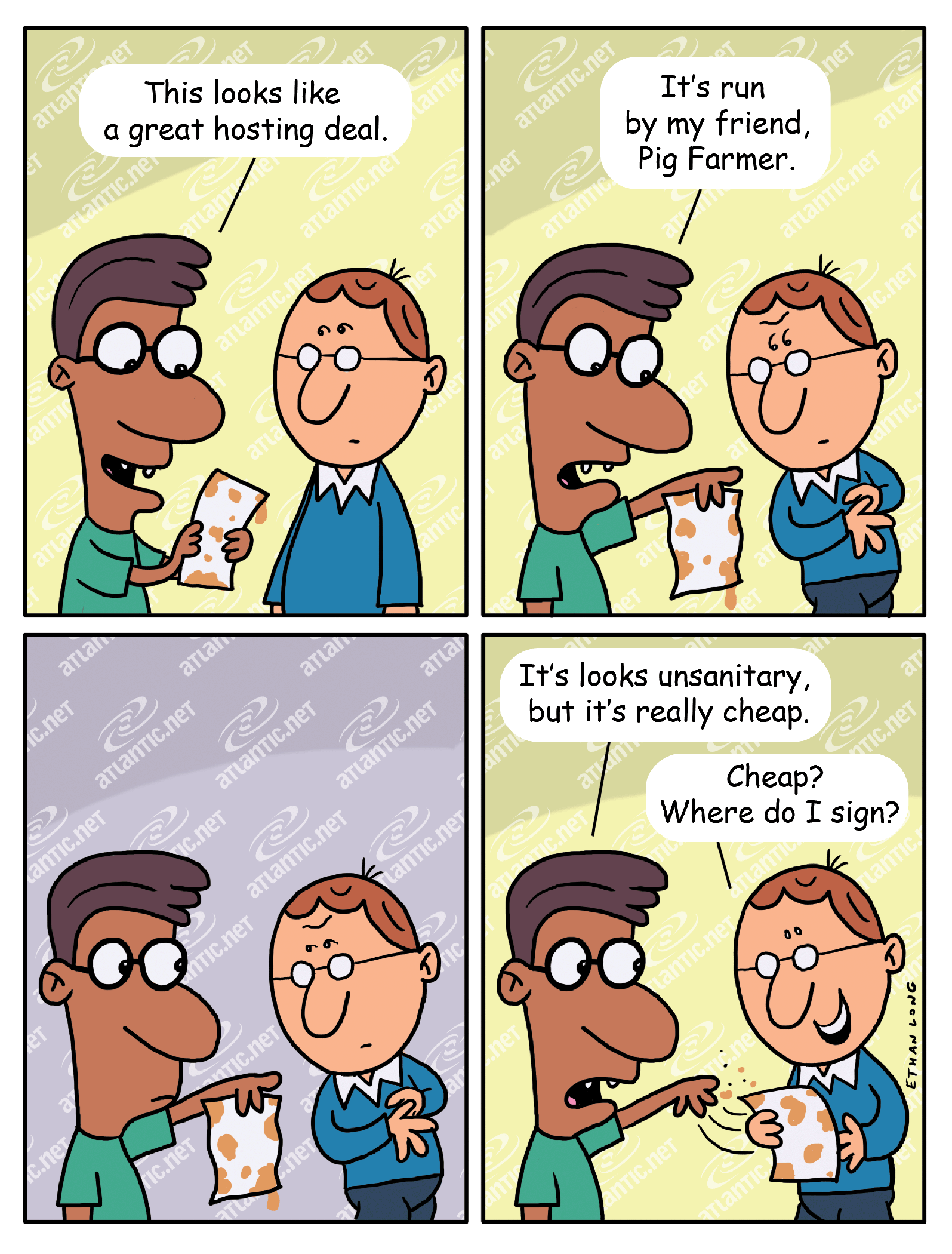